What Is Heart Failure?

Heart failure is a condition in which the heart can't pump blood effectively to the lungs or the rest of the body.

With heart failure, the weakened heart pumps less blood than usual, causing the kidneys and adrenal glands to produce chemicals that help the body to hold onto salt and water.

In addition, the blood vessels constrict, raising blood pressure. This makes it even harder for the heart to push blood through the arteries.

Because the body is retaining salt and water or the heart is unable to pump blood forward, water may pool in the legs and ankles, causing them to swell.

Fluid may also collect in the lungs and interfere with the ability to breathe, especially when lying down.

Left untreated, heart failure worsens and may prevent the heart from pumping enough blood to keep the person alive. 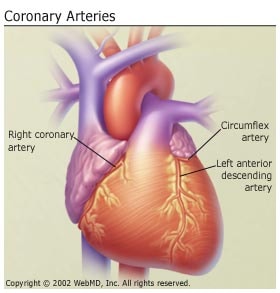 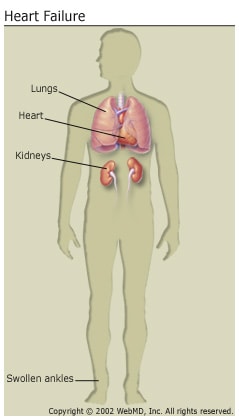 The most common causes of heart failure are:

Many people with heart failure have both coronary artery disease and hypertension.

Heart failure may also be caused by other conditions that weaken or interfere with the heart's function, including:

The Truth About Omega-3

How to Wreck Your Heart

Heart Failure: 8 Things You Should Know

By clicking "Subscribe," I agree to the WebMD Terms and Conditions and Privacy Policy. I also agree to receive emails from WebMD and I understand that I may opt out of WebMD subscriptions at any time.