Antidepressant medications are used to treat a variety of conditions, including depression and other mental/mood disorders. These medications can help prevent suicidal thoughts/attempts and provide other important benefits. However, studies have shown that a small number of people (especially people younger than 25) who take antidepressants for any condition may experience worsening depression, other mental/mood symptoms, or suicidal thoughts/attempts. Therefore, it is very important to talk with the doctor about the risks and benefits of antidepressant medication (especially for people younger than 25), even if treatment is not for a mental/mood condition.

This drug may rarely cause an attack of extremely high blood pressure (hypertensive crisis), which may be fatal. Many drug interactions can increase this risk. Food and drinks that contain tyramine can also increase this risk. See also Side Effects and Drug Interactions sections. Check your blood pressure regularly. Tell your doctor and pharmacist about all prescription/nonprescription drugs and herbal products you take before starting tranylcypromine. Ask them before starting any other drugs while taking tranylcypromine, and even when you stop taking tranylcypromine since it can still cause these interactions for a period of time.

Who should not take Tranylcypromine SULFATE?

Tranylcypromine is an antidepressant (monoamine oxidase inhibitor). This medication treats depression by restoring the balance of certain natural substances (neurotransmitters) in the brain. Tranylcypromine can improve your mood and feelings of well-being. Usually, this medication is used in persons who have not responded to treatment with other drugs.

How to use Tranylcypromine SULFATE

Read the Medication Guide available from your pharmacist before you start using tranylcypromine and each time you get a refill. If you have any questions, consult your doctor or pharmacist.

Take this medication by mouth, usually in divided doses or as directed by your doctor. This medication may be taken with or without food. Dosage is based on your medical condition and response to therapy and usually will not be more than 60 milligrams per day.

To reduce your risk of side effects, your doctor may start you at a low dose and gradually increase your dose. Once your condition improves and you are better for a while, your doctor may work with you to reduce your regular dose. Follow your doctor's instructions carefully. Do not take more or less medication or take it more frequently than prescribed. Your condition will not improve any faster and your risk of side effects will increase.

Use this medication regularly in order to get the most benefit from it. To help you remember, use it at the same time(s) each day. It may take several weeks for the full benefits of this medication to be noticed. Do not stop taking this medication without consulting your doctor.

If you suddenly stop using this medication, you may have withdrawal symptoms (such as restlessness, confusion, hallucinations, headache, weakness, and diarrhea). To help prevent withdrawal, your doctor may lower your dose slowly. Withdrawal is more likely if you have used tranylcypromine for a long time or in high doses. Tell your doctor or pharmacist right away if you have withdrawal.

Inform your doctor if your condition persists or worsens.

What conditions does Tranylcypromine SULFATE treat?

Dizziness, drowsiness, tiredness, weakness, problems sleeping, constipation, and dry mouth may occur. If any of these effects persist or worsen, notify your doctor or pharmacist promptly.

To reduce the risk of dizziness and lightheadedness, get up slowly when rising from a sitting or lying position.

This medication may increase serotonin and rarely cause a very serious condition called serotonin syndrome/toxicity. The risk increases if you are also taking other drugs that increase serotonin, so tell your doctor or pharmacist of all the drugs you take (see Drug Interactions section). Get medical help right away if you develop some of the following symptoms: fast heartbeat, hallucinations, loss of coordination, severe dizziness, severe nausea/vomiting/diarrhea, twitching muscles, unexplained fever, unusual agitation/restlessness.

This is not a complete list of possible side effects. If you notice other effects not listed above, contact your doctor or pharmacist.

Call your doctor for medical advice about side effects. You may report side effects to FDA at 1-800-FDA-1088 or at www.fda.gov/medwatch.

In Canada - Call your doctor for medical advice about side effects. You may report side effects to Health Canada at 1-866-234-2345.

List Tranylcypromine SULFATE side effects by likelihood and severity.

Before taking tranylcypromine, tell your doctor or pharmacist if you are allergic to it; or if you have any other allergies. This product may contain inactive ingredients, which can cause allergic reactions or other problems. Talk to your pharmacist for more details.

Before having surgery or any procedures requiring use of contrast dye (e.g., myelography), tell your doctor or dentist you are on this medication. You may need to stop taking this drug beforehand. Follow your doctor's instructions carefully.

If you have diabetes, tranylcypromine may lower your blood sugar. Check your blood sugar regularly and share the results with your doctor. Tell your doctor right away if you have symptoms of low blood sugar such as sudden sweating, shaking, fast heartbeat, hunger, blurred vision, dizziness, or tingling hands/feet. Your doctor may need to adjust your diabetes medication, exercise program, or diet.

Caution is advised when using this drug in the elderly because they may be more sensitive to the effects of the drug, especially the effects on blood pressure.

This medication should be used only when clearly needed during pregnancy. Discuss the risks and benefits with your doctor.

This medication passes into breast milk. Consult your doctor before breast-feeding.

What should I know regarding pregnancy, nursing and administering Tranylcypromine SULFATE to children or the elderly?

Drug interactions may change how your medications work or increase your risk for serious side effects. This document does not contain all possible drug interactions. Keep a list of all the products you use (including prescription/nonprescription drugs and herbal products) and share it with your doctor and pharmacist. Do not start, stop, or change the dosage of any medicines without your doctor's approval.

The risk of serotonin syndrome/toxicity increases if you are also taking other drugs that increase serotonin. Examples include street drugs such as MDMA/ "ecstasy," St. John's wort, certain antidepressants (including SSRIs such as fluoxetine/paroxetine, SNRIs such as duloxetine/venlafaxine), meperidine, among others. The risk of serotonin syndrome/toxicity may be more likely when you start or increase the dose of these drugs.

Tell your doctor or pharmacist if you are taking other products that cause drowsiness such as opioid pain or cough relievers (such as codeine, hydrocodone), alcohol, marijuana (cannabis), drugs for sleep or anxiety (such as alprazolam, lorazepam, zolpidem), muscle relaxants (such as carisoprodol, cyclobenzaprine), or antihistamines (such as cetirizine, diphenhydramine).

Check the labels on all your medicines (such as allergy, cough-and-cold products, diet pills) because they may contain dextromethorphan, decongestants, stimulants, or ingredients that cause drowsiness. Ask your pharmacist about the safe use of those products.

Tell your doctor or pharmacist right away if you notice symptoms of high blood pressure such as fast/slow heartbeat, vomiting, sweating, headache, chest pain, sudden vision changes, weakness on one side of the body, or slurred speech.

Contact your healthcare professionals (e.g., doctor, pharmacist, dietician) for more information, including recommendations for your diet.

Does Tranylcypromine SULFATE interact with other medications?

Should I avoid certain foods while taking Tranylcypromine SULFATE?

Laboratory and/or medical tests (e.g., blood pressure, liver function) should be performed periodically to monitor your progress or check for side effects. Consult your doctor for more details.

If you miss a dose, take as soon as you remember unless the next scheduled dose is within 2 hours. In that case, skip the missed dose. Take your next dose at the regular time. Do not double the dose to catch up.

Store at room temperature between 59-86 degrees F (15-30 degrees C) away from light and moisture. Do not store in the bathroom. Keep all medicines away from children and pets.

Do not flush medications down the toilet or pour them into a drain unless instructed to do so. Properly discard this product when it is expired or no longer needed. Consult your pharmacist or local waste disposal company for more details about how to safely discard your product.Information last revised March 2019. Copyright(c) 2019 First Databank, Inc. 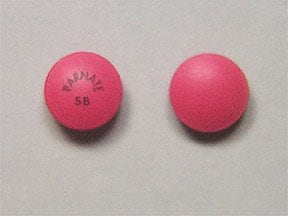 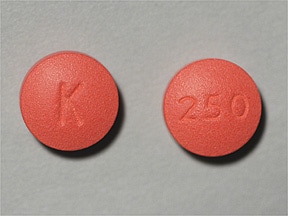 This medicine is a rose-red, round, film-coated, tablet imprinted with "PARNATE SB".
‹ Back to Gallery

This medicine is a dark pink, round, film-coated, tablet imprinted with "250" and "K".
‹ Back to Gallery

This medicine is a rose-red, round, film-coated, tablet imprinted with "TR".
Previous:
Next: Side Effects

Are you taking Tranylcypromine SULFATE?

Are you considering switching to Tranylcypromine SULFATE?

How satisfied are you with the results?

Are you planning to see a doctor about switching your medication?

How long have you been taking Tranylcypromine SULFATE?

Are you planning to see a doctor about switching your medication?

This survey is being conducted by the WebMD marketing sciences department.Read MoreAll information will be used in a manner consistent with the WebMD privacy policy. Your responses will not be disclosed with any information that can personally identify you (e.g. e-mail address, name, etc.) WebMD does not endorse any specific product, service, or treatment.

Thanks for taking our survey!

Find a doctor near you

Recovering From Trauma: 13 Tips to Help You Heal

Save up to 80% on your prescriptions.
Show More Show Less

Medications That Make You Tired

Common culprits and what you can do.

Things to remember when you fill your prescription.

Tips for dealing with them.

How to make sense of them.

More About Drugs and Medications